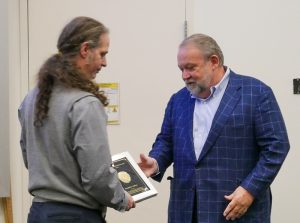 In 2018 we implemented a new alumni award.  The award is given out to a Physics Department alumnus for exceptional achievements and/or service. The award is not limited to physics but covers all areas that our alumni excel in. If you can think of someone to nominate, please send a letter to the Department Chair, Daniel Kim-Shapiro or email (shapiro@wfu.edu) describing why that person is a good candidate for this award. Please send nominations by 12/1/2019. Note that the award will have a modest monetary component.

This year’s winner is Dr. Randall Ledford (’72).  Dr. Ledford accepted the award at a special physics colloquium on April 3, 2019 and gave a talk entitled “Emerson Corporation-A Global Manufacturer of Industrial and Residential Products”

Dr. Ledford is retired from Emerson Electric Company, one of the world’s leading electronics companies, where he served as Senior Vice President and the Chief Technology Officer.  During his time at Emerson, he also created R&D centers around the world including India, China and Eastern Europe.  He was also President of Emerson Ventures beginning in 1997. Prior to joining Emerson, he served as President and General Manager of several different divisions at Texas Instruments Inc., including the divisions of Digital Imaging, Software, Enterprise Solutions and Process Automation.  He began his career with Bell Telephone Laboratories in New Jersey where he worked on UNIX development, fiber optic communication and microwave transmissions. He has served as a director of several companies including Akermin, Inc., Gerber Scientific, Inc., Stereotaxis Inc., Amphenol Corporation and Interphase. Dr. Ledford was a director for the Oak Ridge National Laboratory strategic transition board.  He has served on several university advisory boards including Cornell, Missouri, Carnegie Melon and WFU. Dr. Ledford received a Ph.D. and M.S. in Physics from Duke University and a B.S. in Physics from Wake Forest University. He has endowed two scholarships for undergraduate physics and biophysics majors at WFU.